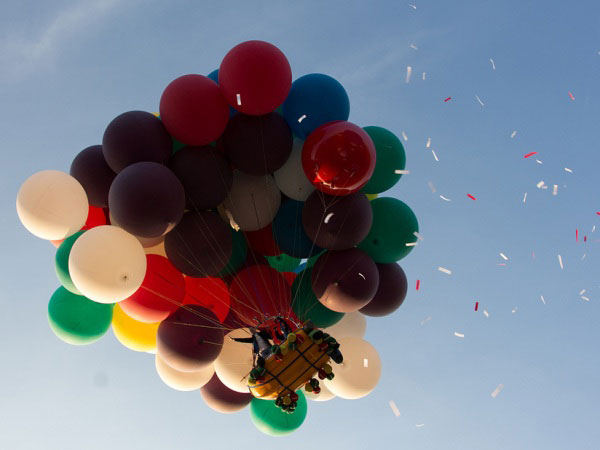 Have you seen the Disney movie ’Up’? Ever wished you could fly up into the sky in a house attached to hundreds of balloons, just like Carl did in the movie? Well yesterday, somebody did just that!

The 21st of November was the 11th annual International Hot Air Balloon Festival, held in Leon, Mexico. Over the past decade, over two million hot air balloon enthusiasts have come together for this event.

Did you know that the hot air balloon was invented in the 1700s by french brothers Joseph-Michel and Jacques–Étienne Montgolfier? Originally it was named a ’flyer device.’ In 1783, during a demonstration of the new invention at the Palace of Versailles, the first passengers to ever travel in a hot air balloon’s basket were a sheep, a duck and a cockerel. Wild! That same year also saw human beings taking their first flight, and over two hundred years later this incredible invention is still being celebrated.

The festival was as always, a great success. The sky of Leon Guanajuato was filled with an abundance of balloons, two hundred in fact. There was an array of shapes, sizes and colours prettying up the sky. These included an ice-cream cone, Mickey Mouses’s head, Spiderman, Pepe le Pew and many more.

What kind of hot air balloon would you like to fly in? Our fave is the ’Up’ balloon, of course. Share your opinions and experiences!